THE APOCALYPSE OF JOHN

“THE APOCALYPSE OF JOHN” AS EXPLAINED BY THE GREEK MASTER NIKOLAOS A. MARGIORIS 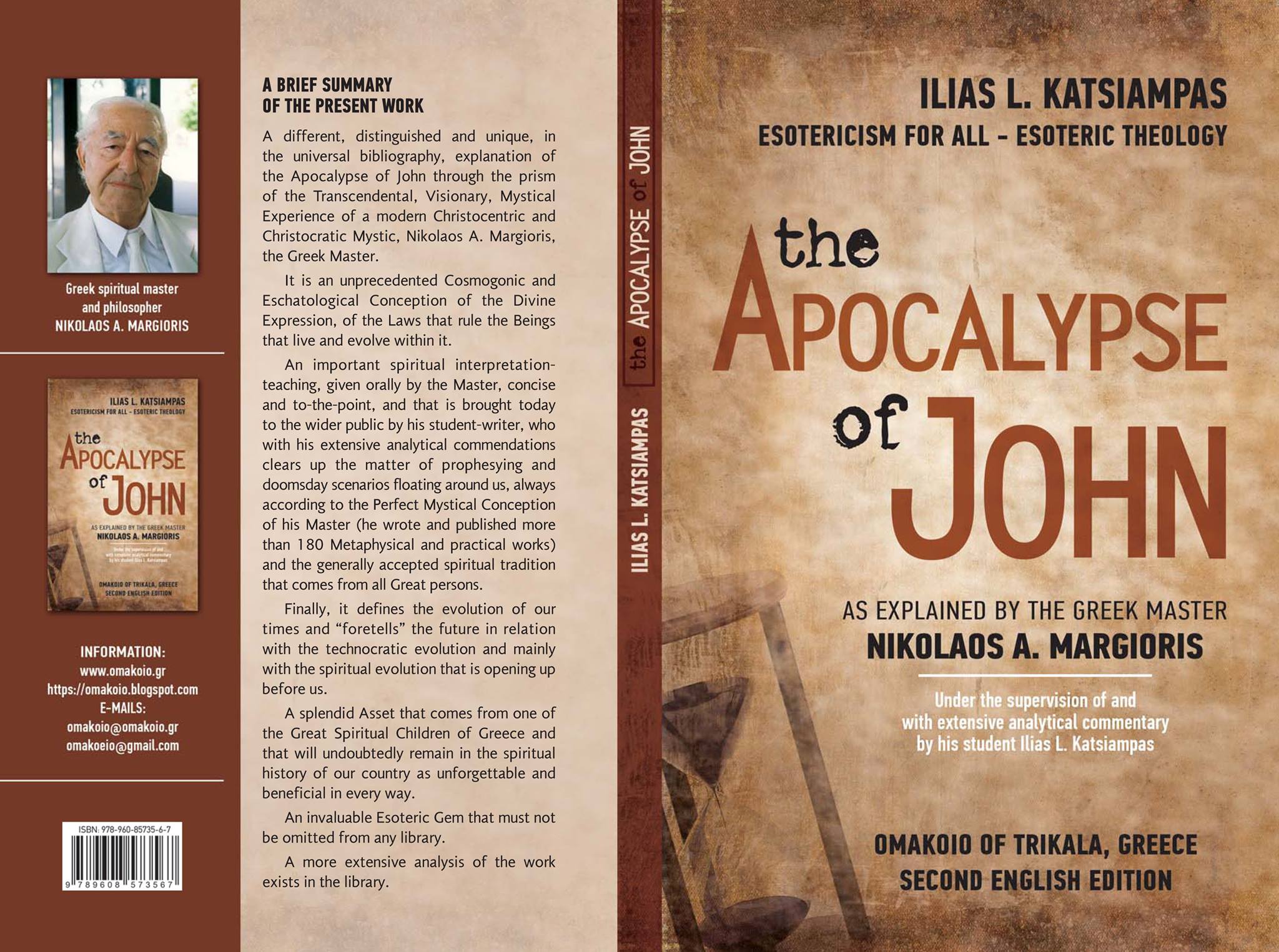 A unique and unprecedented presence in the universal bibliographical annals, the Free Spiritual Explanation of the most basic and disputed points of the Apocalypse of John, is now a Fact, directly accessible to all.

In this English work an important part of the Perfect transcendental Mystical Experience of Nikolaos A. Margioris (1913-1993), the Master of the Spirit, is revealed for the first time.

It concerns a modern Greek-orthodox Christocentric and Christocratic Mystic who sheds ample Light on the Interpretation of the Apocalypse and who penetrates its innermost core, touching the Inner Greatness, Depth and Ecstasy that comes from a true child of the Spirit, John the Apostle.

With particular care, he removes one by one the veils of the most deeply symbolized - enigmatic words that decorate it, presenting the illuminating Unbuilt Light that directs the future of ALL Omnicreation according to the Divine Plan.

At the same time, he clearly Separates it from any earthly - rationalistic and generally untrue interpretations floating around and places it among the highest Visionary conceptions of the Spirit that only the Worthy (the proper vessels) are able to touch.

In simple terms (Esotericism for all), with colloquial expressions and full of hyperintellectual Knowledge converted to intellectual meanings, he shows and initiates the seeker in the bottomless depth and the unfathomable height of Divine Expression, of the Laws that rule it and of the beings that live and are evolved within it.

An uncompromising and spiritually integral Cosmogonic and Eschatological approach, an extremely rare hyperconscious document, a deep and substantial addition that will remain monumental in earthly time is described with great detail and analysis, while at the same time it constitutes a safe compass and a solid spiritual point of reference for everyone interested.

The work is accompanied by the extensive analytical commendations of the Master’s student, Ilias L. Katsiampas who clarifies what is being explained, while at the same time sounding out our times. He examines and “prescribes” the future, having the present and the position of man in it as a strong criterion, and especially in relation with all the doomsday literature, the prophesying - prophecology and the scaremongering that persecutes us and that disorientates us to a great extent and makes us stray from our real duties and responsibilities. But it also examines how the outer and inner Opening of man when facing the future and especially in relation with the spiritual that is found behind Everything must be attained.

All that can and must be given in our present time is presented to the physical observer by a genuine modern Initiate who walked quietly beside us, producing a titanic body of Spiritual Work (more than 180 metaphysical and practical books) flowing from the Complete Spiritual Experiences he had, which constitute the crowning of Spiritual Power in His worthy Vessel.

A comprehensible and comprehensive piece of Work that is a reference point in the spiritual happenings of our country and through which the true continuation of the Perfect Mystical conception and the conveyance of Transcendental Knowledge are secured. With its thorough explanations, it openhandedly and with Ample Love unfolds in front of us the skein of the Whole of Creation.

A Splendid piece of Work that comes from one of the Great Spiritual Children of Greece and that will undoubtedly remain in the spiritual history of our country as unforgettable and beneficial in every way.

A different, distinguished, unique in the universal bibliography explanation of the Apocalypse of John through the prism of the Transcendental, Visionary, Mystical Experience of a modern Christocentric and Christocratic Mystic, Nikolaos A. Margioris, the Greek Master.

It is an unprecedented Cosmogonic and Eschatological Conception of the Divine Expression, of the Laws that rule the Beings that live and evolve within it.

An important spiritual interpretation-teaching, given orally by the Master, concise and to-the-point, and that is brought today to the wider public by his student-writer, who with his extensive analytical commendations clears up the matter of prophesying and doomsday scenarios floating around us, always according to the Perfect Mystical Conception of his Master (he wrote and published more than 180 Metaphysical and practical works) and the generally accepted spiritual tradition that comes from all Great persons.

Finally, it defines the evolution of our times and “foretells” the future in relation with the technocratic evolution and mainly with the spiritual evolution that is opening up before us.

A splendid Asset that comes from one of the Great Spiritual Children of Greece and that will undoubtedly remain in the spiritual history of our country as unforgettable and beneficial in every way.

An invaluable Esoteric Gem that must not be omitted from any library.

A more extensive analysis of the work exists in the library.

CONTENTS OF THE ENGLISH EDITION

THE EXPLANATION OF THE APOCALYPSE OF ST. JOHN

SUPERVISION OF THE WORK

CLARIFICATION      FROM THE AUTHOR

REASON FOR PUBLISHING THE APOCALYPSE

OF ST. JOHN AS EXPLAINED BY MASTER

NIKOLAOS A. MARGIORIS PURPOSE OF THE WORK

GENERAL ASCERTAINMENTS ON THE PROPHECIES

AND ON THE UNCONQUERABLE NEED FOR

THE ESOTERIC EVOLUTION OF MAN

A BRIEF BIOGRAPHY OF JOHN THE APOSTLE

THE APOCALYPSE OF ST. JOHN

AS EXPLAINED BY N. MARGIORIS,

THE THRONE IN HEAVEN, CHAPTER 4

THE SCROLL AND THE LAMB, CHAPTER 5

THE GREAT MULTITUDE IN WHITE ROBES

THE SEVENTH SEAL AND THE GOLDEN CENSER,

THE ANGEL AND THE LITTLE SCROLL

THE WOMAN AND THE DRAGON, CHAPTER 12

BABYLON, THE PROSTITUTE ON THE BEAST,

EPILOGUE OF THE APOCALYPSE OF JOHN

EPILOGUE OF THE WHOLE WORK

BIOGRAPHICAL NOTE OF NIKOLAOS A. MARGIORIS

A FEW WORDS ABOUT THE 30 DAYS

THE BIRTH AND DEATH OF THE WORLDS AND

CONTENTS OF THE WORLDS AND THE BEINGS

SCHOOLS IN OPERATION AT THE OMAKOIOS

OF ATHENS, LAMIA AND TRIKALA

BIBLIOGRAPHY OF THE BOOK

PUBLISHED BOOKS BY NIKOLAOS A. MARGIORIS

OF TRIKALA AND OF THESSALONIKI, GREECE

(AND YOGA ACADEMY OF

OF 189 WRITINGS OF MODERN GREEK MYSTIC,

15 BOOKS OF HIS STUDENT, ILIAS KATSIAMPAS

BOOKS BY OTHER AUTHORS RECOMMENDED

GREEK WRITERS WHO USED EXCERPTS FROM

THE 189 WORKS OF THE AUTHOR AND

(AND CITED IT IN THEIR BIBLIOGRAPHY)