THE MYSTERY OF DEATH

“THE MYSTERY OF DEATH

AND THE POST-MORTEM COURSE OF THE SOYL” 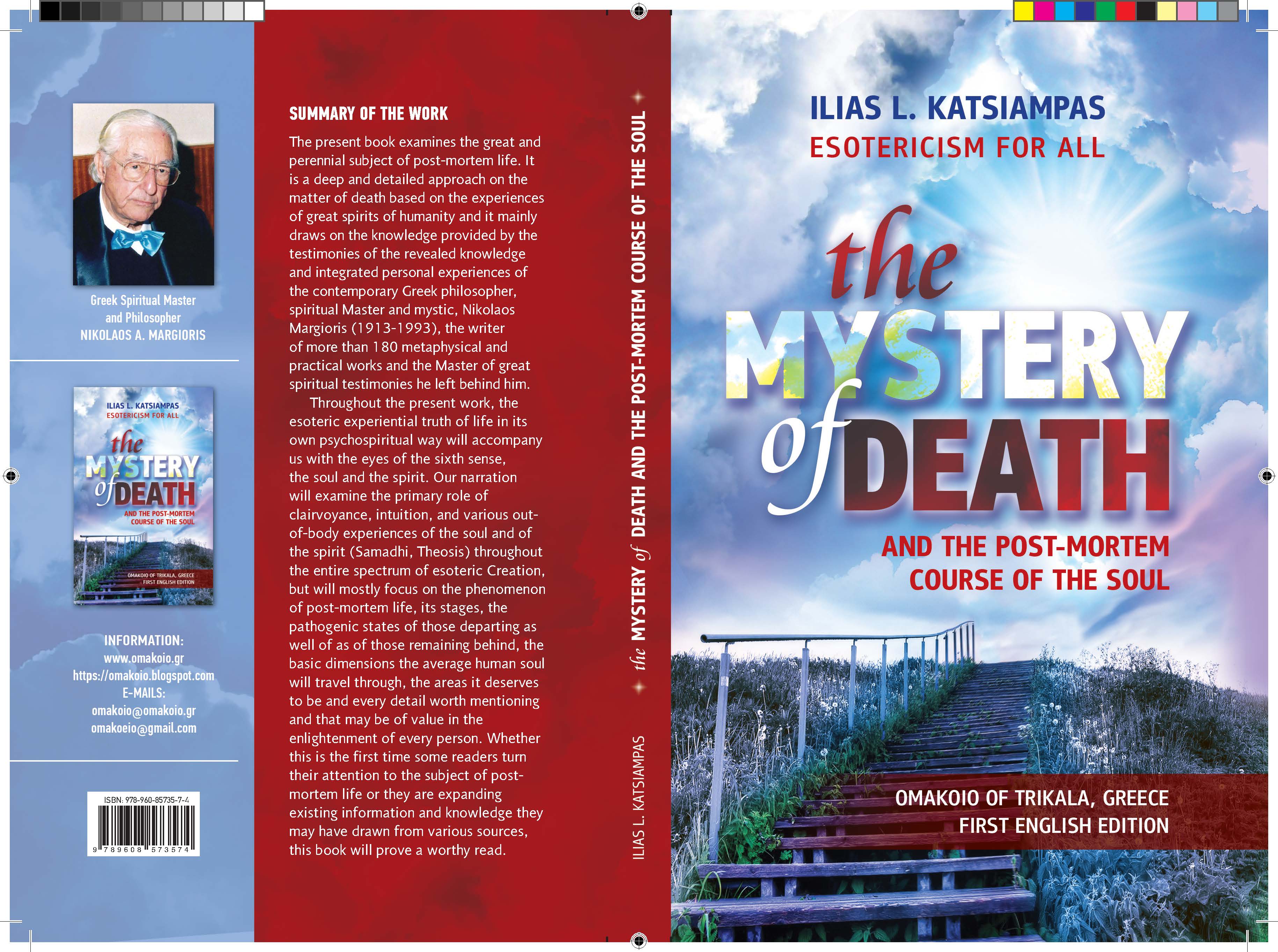 The present book examines the great and perennial subject of post-mortem life. It is a deep and detailed approach on the matter of death based on the experiences of great spirits of humanity and it mainly draws on the knowledge provided by the testimonies of the revealed knowledge and integrated personal experiences of the contemporary Greek philosopher, spiritual Master and mystic, Nikolaos Margioris (1913-1993), the writer of more than 180 metaphysical and practical works and the Master of great spiritual testimonies he left behind him.

Throughout the present work, the esoteric experiential truth of life in its own psychospiritual way will accompany us with the eyes of the sixth sense, the soul and the spirit. Our narration will examine the primary role of clairvoyance, intuition, and various out-of-body experiences of the soul and of the spirit (Samadhi, Theosis) throughout the entire spectrum of esoteric Creation, but will mostly focus on the phenomenon of post-mortem life, its stages, the pathogenic states of those departing as well as of those remaining behind, the basic dimensions the average human soul will travel through, the areas it deserves to be and every detail worth mentioning and that may be of value in the enlightenment of every person. Whether this is the first time some readers turn their attention to the subject of post-mortem life or they are expanding existing information and knowledge they may have drawn from various sources, this book will prove a worthy read.

THE MYSTERY OF DEATH

AND THE POST-MORTEM COURSE

I read your new book entitled The Mystery of Death and the Post-Mortem Course of the Soul, and I enjoyed it very much. Of course, I have to re-read it many times in order to be able to enjoy it even more.

It is a complete, concise, and profound work that contains everything one needs to know about this extremely sensitive topic that concerns everyone.

A metaphysical treatise that adds to our incredibly materialistic world, it presents masterfully woven sparks of knowledge and wisdom on the occultism and mysticism of major mystics, and especially those following the Christian and Hellenocentric ideal, who confirm that the existence of the human spiritsoul is eternal and resembles a boat that travels back and forth between the lower worlds, until it decides to shed some of its load in order to sail even deeper into the crystal clear waters of the inner dimensions and even to its spiritsoul’s seat-origin.

The definition of many concepts and terms is given with clarity, and with your profound but simply presented analysis, it becomes directly accessible to those who have little information on the subject. However, those who are knowledgeable on the subject will become better acquainted with the worldview not only of our Christocentric and Christocratic Mystic Nicholaos Margioris, but of other important Mystics, as well as of other great Truths about this huge issue.

The interpretation of the painting on the front cover of the Master’s book Metathanatia Zoi [Life After Death] creates another strong link for the reader between the unique analysis contained in the aforementioned book and, of course, your wonderful and well-rounded approach.

I congratulate you on your working tirelessly, overcoming the obstacles lying in your way, to promote the multifaceted work of our beloved Master, his deeper personality, and also the continuity of his diverse and inspired work in Greece and abroad.

Administrator of the Omakoio of Loutraki

THE MEANING OF THE WORD OMAKOIO

WHAT A MYSTIC IS.

WHAT A MYSTICIST IS.

OF TRIKALA AND THESSALONIKI

THE SPIRITUAL MASTER AND

THE BASIC STRUCTURE OF OUR WORLD

ACCORDING TO THE EXPERIENTIAL

AND THE POST-MORTEM COURSE

THE CAUSES OF DEATH

THE PICTURE ON THE COVER

EPILOGUE OF THE ENTIRE WORK

OF PYTHAGORAS AND OF NIKOLAOS MARGIORIS

OR “THE OMAKOIO OF PYTHAGORAS

AND THE WORK OF NIKOLAOS MARGIORIS”

THE WORK OF NIKOLAOS MARGIORIS

AND THE POST-MORTEM PATH

SCHOOLS IN OPERATION AT THE OMAKOIOS

OF ATHENS, LAMIA AND TRIKALA

IN THE OMAKOIO OF TRIKALA

BIBLIOGRAPHY OF THE WRITER

(copyrights belong to his heirs)

II) ESSAYS BY NIKOLAOS A. MARGIORIS

BY NIKOLAOS A. MARGIORIS (49 issues)

AND OF THESSALONIKI, GREECE

FROM THE WORKS OF THE AUTHOR

AND THE MODERN METAPHYSICAL MASTER

(AND CITED IT IN THEIR BIBLIOGRAPHY)

(Search and classification by his student

AND OF 14 BOOKS OF HIS STUDENT