49 issues of the journal "Omakoio" 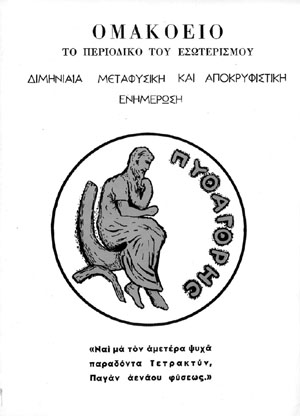 The role of the metaphysical Omakoio journal is very important. In substantial articles, it reveals the Metaphysical Truth, popularizing the Esoteric Mysteries of the Omnicreation.

The Omakoio journal began to be edited in the autumn of 1977, in a bimonthly presentation, and reached unceasingly the issue no. 49, in July-August 1985.

From the first moment it traced its own route and a line absolutely independent from the other types of the Metaphysics, without copying anything. Master Nikolaos A. Margioris, (1913-1993) theoretical and practical system follows. Margioris is a modern Pythagoras who describes in detail all the strong folds of the Esoteric reality, though his deep-perfect mysticist experiences, that he changes into a conscious-intellectual knowledge, so that they can be understood by every interested man-searcher.

In these issues of the journal the most ancient Metaphysical theories are analyzed, aiming to discern the other side of our physical aspect. This enlightenment by a series of initiates as, for example, Pythagoras, Iraklitos, Platon, Ammonios Sakas, Plotinos, Apollonios Tyaneas and hundreds of others, is continued with the Omakoeio journal that has the ambition, in a popularized way (the Esoterism for everybody) and by a simple terminology, to trasnmit the Eternal Truths.

A little necessary introduction in the substance of the matter that the journal treats but also Margioris whole work in general, is as follows:

Behind our own matter, of this world that is diffused in the vibration of this threedimensional area, there is an inconceivable in ecstasy world that touches our own one. Our Mind is constructed in such a way that functions by the irritations of our etheric-physical world, that correspond absolutely to our - made of the similar matter - Mind. A quite evident, normal and dependable cooperation takes place between the human Mind and the Mother-nature- matter.

However, at the same time, in the body and above our Mind, there is our Intellect that accepts the esoteric irritations, which the soul rejects.

This is the mans real substance

The Mind and the matter around us constitute a harmony. Then, the Intellect with the soul make another harmony, higher and more sensitive that the first one. The one harmony, the lower one, of the Mind and of the physic-matter, completes the other, the superior one of the psychical semse. These two great harmonies, the physical and the psychical, direct and administer the human mind. Sometimes the one and sometimes the other administration-influence leave their irritating impressions by which every man lives, thinks and gets activated.

The external world or the lower harmony is as much useful as the Esoteric or higher harmony, that one of the Intellect and of the soul. Together the two harmonies compose Pythagoras Great Lamda, of which the ascending and the descending side must have an equal height-length. If the ascending side overrides, then the descending side is supplanted and a lack of balance appears through the human being. But if the higher side relies on its ascension to well balanced stations, as in Pythagoras musical scale, then there is no fear nor lack of well-balance.

On the contrary, the descending side, that one of the extroversy, the right side, the circle of the matter- nature - Mind, the sensational function of the conscience-wakefulness, must be strong to lift the weight of its sister, that will likely rely on the extroverting form-expressing reality. Philosophies and theories were based upon the two existent but mutually opposing currents that live and exist within us, either we want it or not. So, we are double-substantial beings. Spiritual and physical-intellectual.

Here is the great role of the Omakoeio journal and of the Esoteric Education. The reader of our journal is informed ingeniously in the respective analysises of the Metaphysical problems, of the existence of the interminable invisible world, the activity of the great leg of the Pythagorean Lamda. This will help man to be elevate phsically-spiritually, in order to put in function the Intellect that is above the Mind, and to operate by the soul that waits the orientation of the Intellect.

At the same time, our physical Mind is attracted to the contact of the Intellect and of the Soul and it is not occupied with the low irritations that the sensations carry continually in its desirable area. This introspection of the Intellect and of the Mindconstitutes the fellow-mans spiritual food or the spiritual elevation and spirituality. This may happen either by reading a wise book, either by the words of a wise man, or by a religious ceremony, or by reading a passage that tells the truth about the eternity that is God.

Therefore, the Intellect can, by the proper External Metaphysical articles and by the esoteric philosophy, be irritated and turn to the soul carrying the Mind to an introvert turn, to an introspection. Also, it is possible for a phrase of a Metaphysical meaning to push the same Mind to deliberate about the meaning and the target that the written phrase, extract, passage or article offer especially, to irritate the extrovert human Mind.

A metaphysical description, properly formulated, can open the esoteric spouts of the spiritual fluids of our own source, that as a high flood will start flowing outwards, to the Mind, resulting to move it and to cause its interest, to watch the presentations of its Intelllect, that are nothing else than the waves of the higher frequencies the soul puts out.

But these conceived psychical secretions, the superior vibrations of our esoteric being, refine our thoughts and form a new desire of the Mind, to the finding of the most perfect. The mortal being is gradually despiritualized and sees the spiritual side of the world, equally invisible to the many people that for the elevated, becomes visible now.

As a matter of fact, the following question arises: What is the usefulness of this human elevation in the daily life? The answer is that when man is humanly elevated beyond his usual conscious knowledge in the transgressive source of the Divine Wisdom, he becomes more human and within him the love for all the creations of Him is born. Also, an elevated being finds new thoughts through which he helps in the elevation of his nearby persons, known and unknown. He affects the whole race of the people, for their perfection, their love, their sacrifice and the formation of ideals that elevate the humanity to the wellbeing and to the happiness, to the searched gold-spiritual century, to which Jesus Christ seeked to guide us.

This little metaphysical journal of yours analyzes and explaines to you in its own way, the facts happening beside our physical world, as the Mind of the Metaphysical Philosophers (initiates) conceives them. It applies to all the seven classes of the human being and to the seven different frequencies of their Mind and offers them the proper philosophical material, so that their Mind may get irritated for the spiritual elevation.

Also you, my friend reader, can come near to the impenetrable sanctuary and to taste, if you need it internally of course, the honey-nectar of the metaphysical Omakoio journal that exists in the Esoteric Key which Master Nikolaos A. Margioris created and that contains Specialized Branches of Studies in the Esoterism by correspondence courses, by the analogous theoretical and practical formation.

TO SEE THE CONTENTS OF THE 49 ISSUES OF THE METAPHYSICAL OMAKOEIO JOURNAL, CLICK ON THE ISSUE YOU WISH