FROM THE MASTER’S MOUTH TO THE STUDENT’S EAR

“FROM THE MASTER’S MOUTH TO THE STUDENT’S EAR” 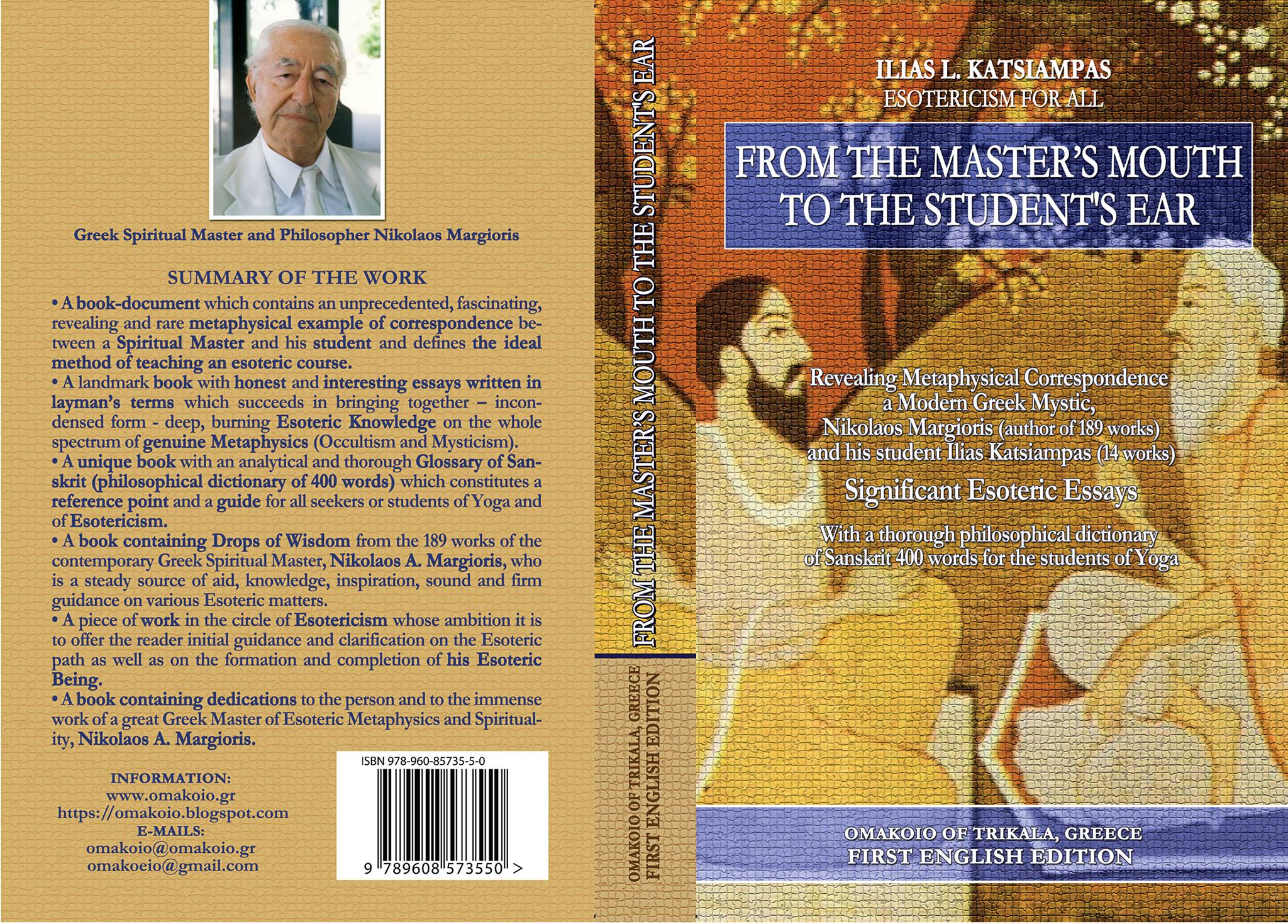 A book-document which contains an unprecedented, fascinating, revealing and rare metaphysical example of correspondence between a Spiritual Master and his student and defines the ideal method of teaching an esoteric course.

A landmark book with honest and interesting essays written in layman’s terms which succeeds in bringing together - in condensed form - deep, burning Esoteric Knowledge on the whole spectrum of genuine Metaphysics (Occultism and Mysticism).

A unique book with an analytical and thorough Glossary of Sanskrit (philosophical dictionary of 400 words) which constitutes a reference point and a guide for all seekers or students of Yoga and of Esotericism.

A book containing Drops of Wisdom from the 189 works of the contemporary Greek Spiritual Master, Nikolaos A. Margioris, who is a steady source of aid, knowledge, inspiration, sound and firm guidance in various Esoteric matters.

A piece of work in the circle of Esotericism whose ambition it is to offer the reader initial guidance and clarification on the Esoteric path as well as on the formation and completion of his Esoteric Being.

A book containing dedications to the person and to the immense work of a great Greek Master of Esoteric Metaphysics and Spirituality, Nikolaos A. Margioris.

FROM THE MASTER’S MOUTH

TO THE STUDENT’S EAR

A bold and remarkable book recently released in Trikala, Greece. A book that deals with the limits of Metaphysical philosophical thought.

The writer of the book succeeds in conveying, in original form, the personal relationship that he developed with his Master, including all the small and unimportant – though they are not - details of a heart-warming correspondence which is also the beginning of the acquaintance with his Master.

All these small details are relevant to the whole work because they highlight the sincerity, the passion, the spontaneity, the agony, the hesitation, the doubt - and why not - the youthful contempt and finally, the humiliation; details that forced Ilias L. Katsiampas, the author, to write a book which surpasses the limits required for the subject. The result is a clear analysis in layman’s terms of the path of knowledge in Esoteric Metaphysics.

A book with complex questions is made readable, understandable, and accessible to every reader.

The book is supplemented with a Sanskrit Glossary (an analytical philosophical dictionary of 400 words).

Among other things, he was taught the pure form of Raja Yoga and he was trained in numerous other esoteric fields of interest (Esoteric Philosophy, Esoteric Theology, Mysticism, Astrology- Astrosophy, Hypnotism-Orthopsychism, Scientific Spiritualism, Esoteric Therapeutics and so on) and gradually ascended the steps of his spiritual evolution.

The fiery and indomitable tendency and willingness of the writer to explore the Beyond in combination with his intensive training, apprenticeship and direct close relation with his Master N.    Margioris for almost a decade, contributed decisively to his gradual formation of an integrated experiential clear perception-point of view on the whole field of Metaphysics as well as the practices of meditation and mysticism.