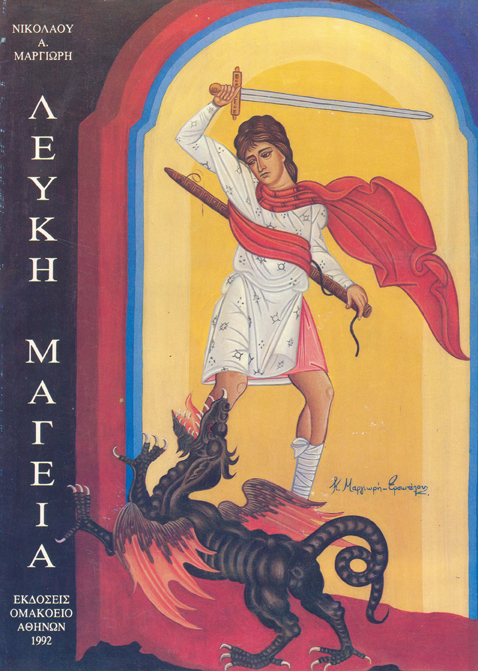 This is N. Margiori's fourteenth book and it was published for the first time in 1979 (two editions). In this book, a clear and very lucid distinction between the white and the black magic, takes place. It is about a detailed analysis that shows the difference between the good and the eternal evil, the white magician who always wins rather easily his black, bad and wicked enemy. Also, it shows us the struggle of the white magician-curer who, every day is more encouraged and even is strengthened automatically by the Mother nature that is unceasingly interested in the harmonious and the perfect, which only the white magician loves. As described in the said book, the white and the black thoughts are indicative situations of the psychical qualitative evolution of the fellow-man and it is now ascertained that as long as man is evoluted, as his psychical world ceases turning to the lower goods of the matter and consequently, he does not endeavour to get them using all the means. From this victorious moment of our abstention from the acquisition of the seductive goods of the matter, the black thought that was seeking the, moves away from its rule and gives its place to its other sister, the white thought. When this change is realized in our psychical world one day, our daily life starts being ruled by the white magic. The white magic ;is the power that excites the frozen etheric powers of the organism that give our nature-cells rigour and life. On the contrary, its sister, the black magic putsour powers within us to sleep and makes them lethargic and it does not let life derive freely what it needs. The white magician , as a soldier of good, gives holeheartedlythe powers that man needs in his physical presentation. On the contrary, the black magician drugs our powers within us and. cuts in every way their absorption from our natural body which seeks them, to live. He who reads this book, will participate in the murderous struggle beteween th spirit of the Good and of the Evil. In depth, it is about a human evolution and a human spiritual elevation. The mortal being, ruled by the morality, is changed into a self-ruled Christianic Being and extinguishes the black powers that once predominated. The proper prayers are given, taken from the archives from the eternity of the goods and of the saints of the whole humanity. Supplications and appeals to the blameless Unit, our pure and eternal Creator and Father. The reader gets out of the known limits of the confined facing with the evil and gets hypersubstantial powers by which he fights against the cursed evil in all its expressions and finally, with the help of the Holy Ghost, it OVERCOMES. Therefore, in order that man may be able to get self-elebated to the spiritual Divine areas, man can use what is written in this book The written exorcisms and prayers, will fire up the divine - good - perfect and holy powers being in lethargy, and will drive away for ever the evil in the Hades of the world. Do try my friend reader.