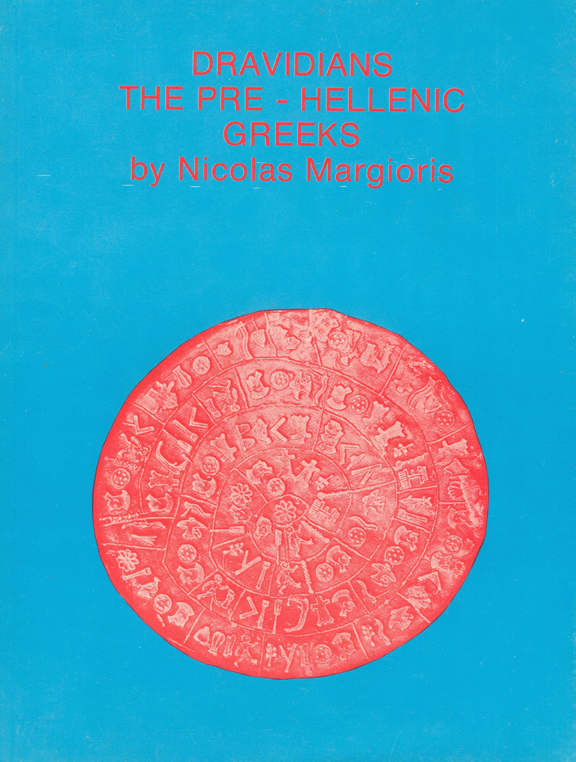 This is N. Margiori’s thirteenth book that was published for the first time in 1979 (three editions). .It is occupied in the Greeks’ ancestors, the Dravidians. It concerns an era that ended in about twelve to sixteen thousands years B. C. During that far-off time, Atlantis (in the Atlantic ocean) and Hinterland (the largest part of the today’s Mediterranean sea) sank by turns, due to their super-arms, after a cruel war against the Dravidians’ opponents, the Atlantins, who had then created many sufferings. A splendid people (Dravidians) who had a strong technical and mainly spiritual civilization, sank. And only those who lived on the high mountains of the endless plain of the Mediterranean sea, survived. The tragedy of the “cataclysm” is described at all its extent and in detail, and not as Moses mentionss it conpressively in his Pentateuch. After the destructive war that the Atlantins created at the expense of the Dravidians, the Atlantic and the Pacific oceans broke their barriers. and entered the Hinterland. They made it the Mediterranean sea and covered thousands of towns and villages of our ancestors Dravidians. Also, the African sea, now the desert Sahara, rolled into the Mediterranean sea and drowned everything. Those who survived came back to the mainland of Greece, as Deukalion and Pyrra and exactly because they sailed continually to the open seas, to the “pelaghi” (the greek work for the .oceans), they were renamed Pelasghi. And later on, when the Aryans descended and a mixing of the two peoples, Pelasghi and Aryans took place, they formed the Greeks. A gteat part of the rescued Dravidians moved to the East and they reached India, six years before the Aryans arrived there. These were they who created Yoga and the Philosophical Systems that accompany it, as well as the Indian people and Civilization that, in its greatest part, is a transference of the civilization of the Dravidians - Pelasghi - Greeks. In this book also many archeological, glossological, historical and metaphysical proofs and documents verify the above point of view.

WITH A SUPPLEMENTARY AND EXPLANATORY MATERIAL