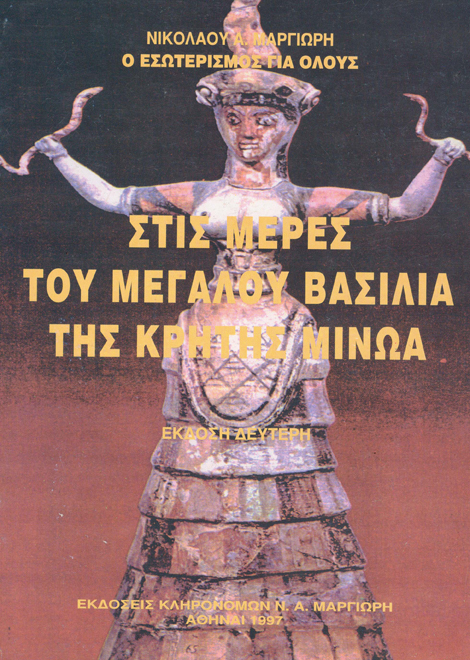 This is N. Margiori’s twelfth book and it was published for the first time in 1979 (two editions). In it, the Minoic civilization is described that is the only one being able to stand by its own arms, as the most ancient civilization of the Mediterranean sea and of all Europe. Through archeologist Evan’s searches, some archeologic findings came in light which ascertain us that there were many Minoans, thousands of years before the Trojan war. The above are not any arbitrary conclusions. Homer tells us about the curious machine “Talos” which turned around the island three times per twenty hours, and it was spying its shores. . Then, in front of the searcher’s eyes Lavrys rises, the perfect symbol of the dualism. Spirit - matter - Even - odd, Life - death, Visible -invisible, Known - unknown etc. In these symbols that the writer desymbolizes so simply, the reader enters the principles of the mysteries of the very old civilizations, where the initiates of those times kept for the knowledge of their descendants, so that one day they may become again the property of the later generations.