“ESOTERIC AND MYSTICAL EXPERIENCES OF MASTER NIKOLAOS A. MARGIORIS” 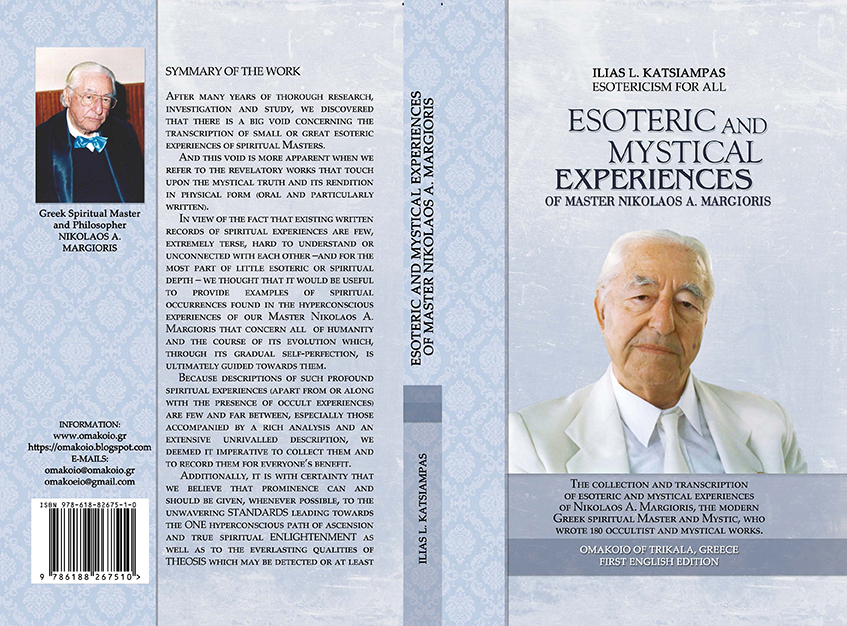 After many years of thorough research, investiga­tion and study, we discovered that there is a big void concerning the transcription of small or great esoteric experiences of spiritual Masters.

And this void is more apparent when we refer to the revelatory works that touch upon the mystical truth and its rendition in physical form (oral and particu­larly written).

In view of the fact that existing written records of spiritual experiences are few, extremely terse, hard to understand or unconnected with each other – and for the most part of little esoteric or spiritual depth – we thought that it would be useful to provide examples of spiritual occurrences found in the hyperconscious experiences of our Master Nikolaos A. Margioris that concern all of humanity and the course of its evolution which, through its gradual self-perfection, is ultimately guided towards them.

Because descriptions of such profound spiritual ex­periences (apart from or along with the presence of occult experiences) are few and far between, especially those accompanied by a rich analysis and an extensive unrivalled description, we deemed it imperative to col­lect them and to record them for everyone’s benefit.

Additionally, it is with certainty that we believe that [ 212 ]

prominence can and should be given, whenever possi­ble, to the unwavering STANDARDS leading towards the ONE hyperconscious path of ascension and true spiritual ENLIGHTENMENT as well as to the ever­lasting qualities of THEOSIS which may be detect­ed or at least mentioned. Because of this certainty, we make these highly valuable and interesting spiritual experiences public for the first time.

CONTENTS OF THE ESSAY

OF MASTER NIKOLAOS A. MARGIORIS

DESCRIPTION OF THE SPIRITUAL EXPERIENCE OF MASTER NIKOLAOS A. MARGIORIS 40

DESCRIPTION OF THE AWAKENING 53

A FEW WORDS ABOUT THE 30-DAY NIRGUNA SA­MADHI-THEOSIS OF NIKOLAOS A. MARGIORIS, THE SPIRITUAL MASTER 84

THE BIRTH AND DEATH OF THE WORLDS AND THE BEINGS 87

CONTENTS OF THE BIRTH AND DEATH OF THE WORLDS AND THE BEINGS (MATTER-ANTIMATTER-HYPERMATTER, UNIVERSE-ANTIUNIVERSE- HYPERUNIVERSE) 89

INTRODUCTION TO THE LIFE AND WORK OF NIKOLAOS A. MARGIORIS, THE SPIRITUAL MASTER 115

SCHOOLS IN OPERATION AT THE OMAKOIOS OF ATHENS, LAMIA AND TRIKALA 118

QUESTIONS ASKED AT THE INTERVIEW 122

A FEW WORDS ABOUT THE 30-DAY NIRGUNA SAMADHI-THEOSIS OF NIKOLAOS A. MARGIORIS, THE SPIRITUAL MASTER 129

BIOGRAPHICAL NOTE OF NIKOLAOS A. MARGIORIS 169

SYNOPSIS OF THE RARE GREATNESS OF THE MASTER 179

SCHOOLS IN OPERATIONAT THE OMAKOIOS OF ATHENS, LAMIA AND TRIKALA 182

IN THE OMAKOIO OF TRIKALA THE FOLLOWING DEPARTMENTS ARE IN OPERATION: 185

BIBLIOGRAPHY OF THE WRITER 194

PRESENTATIONS ON YOUTUBE AND ON FACEBOOK OF 189 WRITINGS OF MODERN GREEK MYSTIC NIKOLAOS A. MARGIORIS (1913-1993) AND OF 14 BOOKS OF HIS STUDENT ILIAS KATSIAMPAS 206