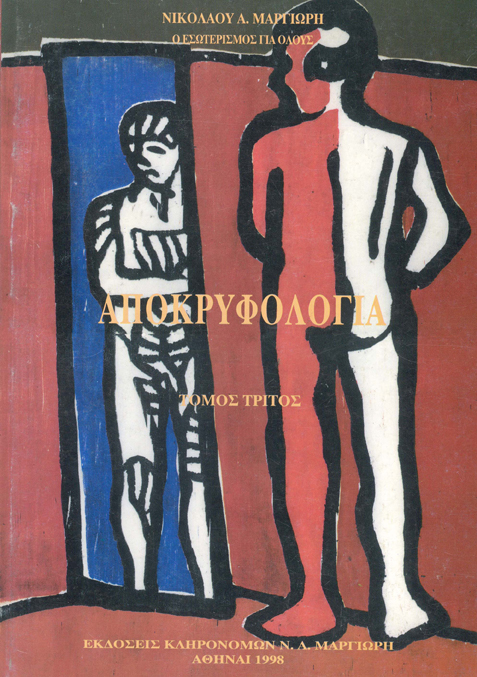 This is Master Nikolaos A. Marioris thirty-fourth work. It contains three volumes and its third volume was published in 1998. It is about the last work of the writer who was writing until the day of his departure (May 6th, 1993) whixh he did not have enogh time to complete. It is half-finished but the existing text comprises improbable details in relation with the Creation, the Cosmic Good and the Cosmic Evil, and how the second one, personificated in the name of Arcaghel Ilotas or Lucifer or Devil or.... prevailed on the 7th Founding Ray and its beings for a long time, in the far past until Archangel Michael was mobilizated by the Divine Plan, and after a titanic struggle, managed to rout the Black Argangel of the Darkness and to confine him in the Chaos. Thus, he himself undertook to share the Substance of Life, from Father to his beings. But the inocculation of the Black Archangel remained deeply to his disciples that he had enough time to create but also at a latent situation around us, within and outside us. He who reads this book will feel the necessity to take a responsible position between the good and the evil and to become a servant of the good and of the perfection (god) in all its manifestations. It is also explained how and why he who needs the esoteric call for the service of the Divine Plan and follows it, will be embraced by the spirit-nets of God, and will constitute, consciously now, an inseparable piece of Him and an organ of His goodness and of his love in our world. See also the summaries of the other two volumes.

CONTENTS
(WE COPY THEM EXACTLY AS THE WRITER HAS WRITTEN THEM)

PREFACE
INTRODUCTION
CAN AN OCCULTIST BECOME A MYSTIC, SOME DAY?
IN THE SPIRITUAL NETS OF GOD