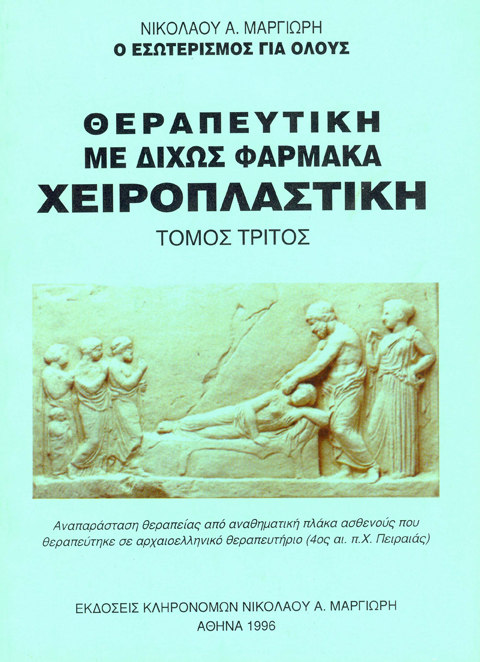 It is Master Nikolaos Margioris thirty-third work. It includes three volumes and its third volume was published in 1996. This directly practical writing work composed of three volumes was baptized Chiroplastic Therapeutics without medicines to suggest the cure only by physical means and even, with a plenty of therapeutical systems, either autonomous or mixed one with another, that belong to the Esoteric Therapeutics, as: Siatsu (Japanese technique that means fingerpressing), the Ancient Greek Asclepean Massage (Asclepieia-Amfiaraeia), or Fingertapping (Nikolaos Marioris method), the suggestion, the Ensleeping (today it is called Hypnotism), the Reflexology, the influence on the thirty three vertebras, the Static Therapeutics and many other methods of physical therapeutics without medicines that are exercised with bare hands, with knowledge, experience and above all, with Concentration. More concretly, this work of the three volumes is the result of a series of 11 seminars lasted three days for the Therapy Without Medicines that Master Nikolaos A. Margioris taught at his seat, in Omakoeio of Athens. In these seminara, an extensive-exhausting, theoretical and practical analysis of the most basical therapeutical methods and mainly of Siatsu, took place. He divided it in 23 groups that represent the 186 most spread diseases and thus, he who is interested in, has the ability, on the basis of the disease he suffers from or he wants to cure, to run to this work of three volumes, in order to see which group or groups he belongs to, and then, to look at the relevant sketches with the indicated points for the execise of the therapeutical techniques, to be fully aware as to how he will function. At the same time, the whole necessary theoretical formation that completes the trainees education is afforded, that together with the practical metodology gives him the ease to start taking the initiative to help himself and his fellow-man. Tne first volume of the Chiroplastics contains the four first seminars (April 1989, November 1989, March 1990 and June 1990), the second volume the next four (May 1991, November 1991, March 1992 and June 1992), and the third and last volume the remaining three seminars (November 1992, February 1993, the third had been programmed for Mary 1993 but due to the writers departure, it was effected in the automn by his assistant Smaro Kosmaoglou. The aim of the whole work is to teach practically and theoretically, what disease is and how it can be cured properly and radically, by a superior operation, different than the one we know and that, instead of medicines and lancets, it uses the internal activity, the treasured but also the unused, rich dynamism of every man. In the mentioned work the diseases and their causes, as well as the most basical systems of the Esoteric Therapeutics for its reinstatement and its bringing the health and the harmony back to the suffering fellow-man, are analyzed. The techniques and the methods that must be followed to bring the desired result of the therapy, are presented thorouglhly, as much theoretically as practically. The writer underlines somewhere that by God and by the good luck, the therapeutical results are achieved. Every worker of the good is an organ of the inviolable luck (of God), that is of the Law of the Retributive Justice (Karma).

CONTENTS OF THE THIRD VOLUME

writer himself, but it did not take place due to his departure to our

A few words about his multi-dimensional work .....