THEY DANCE BAREFOOT ON FIRE (ANASTENARIA) 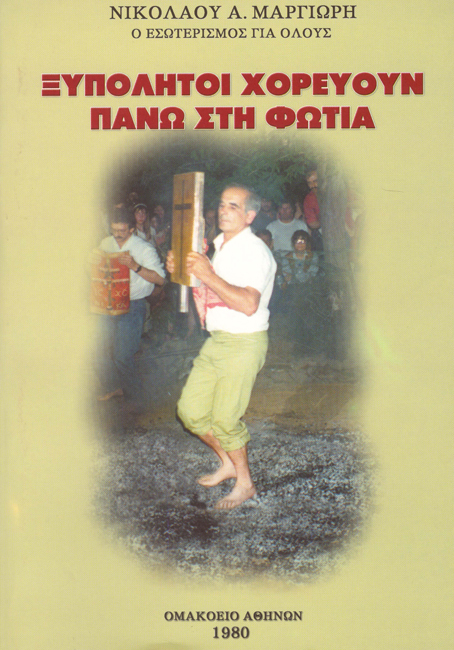 This is N. Margioris fifteenth book and it was published for the first time in 1980. In its lines, the reader can find the esoteric value and the substance of this work. The Greek Anastenarides, who are unique in all the world, prove their mysticist psychological make-up, and by their fire-walking,, they present us one of the inexplicable mysteries in earth, the n o n - f l a m m a b l e phenomenon. An invisible power that is unknown to the exoteric science until now, moves some mechanisms superior than those of the nature, that make man the sovereign and the winner of the natural elements. Having as his arm his absolute belief, he pours out from the depths of his soul a hyperdynamic substance of etheric nature, Aristotles tendency to the perfection or the hectoplasm of the todays scientists, that is scattered in the body and showers it all over. As a dew that pours out from inside, it passes through the pores of the skin and as soon as it gets in contact with the fire, it gets crystallized and as a hypernatural steel, it becomes impermeable, while it takes off the permission from the oxygen to be united with the fire, and then it gets quenched.. Here is the soul sovereign of the matter... You will find all the stirring and unbelievable truths about Anastenaria, in the pages of this booknext scale for the elevation of man to the heavenly heights, where the eternity and the transcendency go along with and have a close intercourse.

THEY DANCE BAREFOOT ON FIRE (ANASTENARIA)

4. DESCRIPTION OF THE ANASTENARIC AND

5. THE NOT BURNING PHENOMENON IN THE

7. JUDGEMENTS AND COMMENTS ABOUT

8. THE SACRIFICE AND THE THEOFAGY