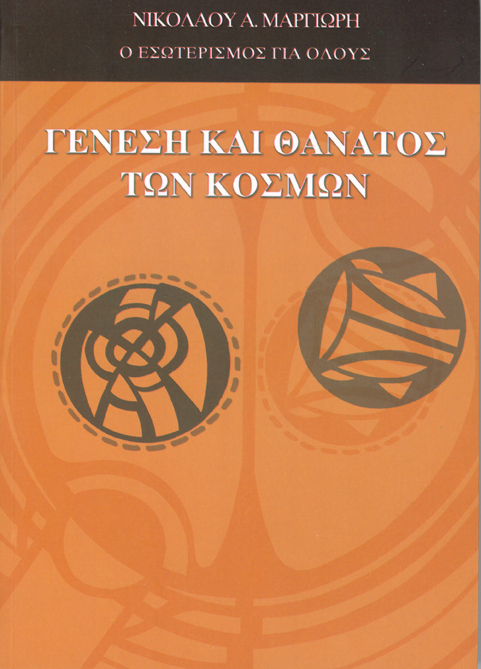 It is N. Margioris tenth book that was published for the first time in 1979 (two editions). In it, the writer gives his absolutely own, personal answer to the great matter of every epoch, the eschatological one. His mysticistic soul reveals its experiences and tries to give the answer, having as a means and organ the Mind and the pen, for the hyperintellectual and the hyperconscious events. On the basis of these an eternal creative circle is unfolded that WORD coordinates and creates, and that in our human language is named Jesus Christ. In our mentioned work, a deep and endless visualiztion prevails, combined and stengthened by the Nuclear Physics, Astronomy. Astrosophy, Theology and the Esoteric Philosophy, already from the preface and it reaches the epilogue very gianted, in order to offer the amazed reader some scenes of hyperbiblical and improbable images. The Birth and Death of the world is unrolled in front of the natural screen that the reader follows and sees that none of the beings that are born in the various worlds of the Creation is exempted and escapes from the eternal Laws that define and supervise their beginning and their end. Matter, Antimatter and Hypermatter obey and follow faithfully the executed plan of Him, whose the purpose is the evolution of the worlds and of the beings, the products of His Substance itself. An endless struggle of His divided powers bears life and form in His infinite worlds and directs the eternal BECOMING. This superb and eternal scene in which the First Sperms of the Omnicreation move, is described, interpreted and depicted embossedly in the unprecedented pages of the book...

Albert Einstein's four equations for the birth and the

death of our world